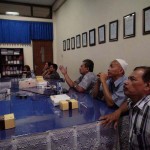 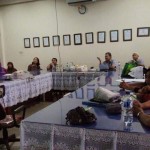 It is an honor that Prof.Dr. Ir. Y. Purwanto, DEA, Executive Director of National Program MAB-UNESCO Indonesia, LIPI who would like to become an examiner of Opened Examination conducted by one of students of Biology Doctoral Study Program and presented a guest lecture with theme “Ethnobiology and Biosphere “ on Monday, June 2nd 2014 in Biology Meeting Room.

In the guest lecture, he said that Ecosystem Services in Indonesia has high economical value if managed well. Unfortunately, to make it come true, main obstacles will be faced such as politic and investment. The lack of government support and investment will inhibit the process of biodiversity management. In addition, many habitats disappear and forest fires increase are two factors which make the management more difficult.

Human, the main manager of biodiversity also becomes big problem recently. “Cultural obstacles such as human behavior which eager to get result instantly, people tend to use foreign products and do not appreciate local products can inhibit biodiversity management,” He explained.

Therefore, it is needed many researchers who can handle and solve those problems and supported by government and society so biodiversity management will run well. Researches on Ethnobiology should be increased because the number is lack, only about 0, 05%.