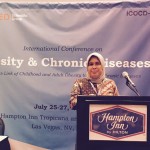 ICOCD-2016 aims to lay a platform for the interaction between eminent scientists around the world to Discuss Link of Childhood and Adult Obesity to Other Chronic Diseases. This summit would bring together bright minds to give talks that are idea-focused, and on a wide range of subject, to foster learning, inspiration and provoke conversations that matter. The ICOCD committee was invited Prof. Fatchiyah who one-on-one researchers as  inviting speaker from Indonesia. They also invited the other researchers from USA, India, Japan, Canada, Europe countries, UEA countries, China and others to talk and discuss deeply on Obesity and Chronic Disease: treatment and exercise, change lifestyle culture on population, and metabolic mechanism.

Fatchiyah, talked in ICOCD Las Vegas, Nevada, USA at July 24-27, 2016 with entitle “Black Tea Leaves and Rambutan Peel from Indonesia Natural Plant has Biological Function as Anti-obesity Agents: Nutritional Genomic Study”. She was focusing in her speech on Nutritional treatment by natural compound to reduce adipose cell proliferation and controlling genes cascade susceptibility with obesity. Obesity is one global problem not only in developed countries, but also developing country. According to WHO data, more than 1.4 billion adults are overweight and 2.8 million adults die each year because of obesity and overweight that causes a variety of chronic diseases such as diabetes and heart disease. Source Euro monitor International said the Asia-Pacific, obesity is increasing rapidly from 2010 to 2020 namely, Vietnam 225 percent, 178 percent Hong Kong, India 100 percent, South Korea 80.7 percent, Zealand The new 52 per cent, and Indonesia 50 percent. The number of obese people in Indonesia is increasing in line with the change of lifestyle. Nowadays, Indonesia entered into the top ten countries with developing overweight and obesity, around 40% of the adult population. Health Ministry Republic of Indonesia in 2013, reported that the national problem obese children aged 5-12 years are still high, ie, 18.8 percent, 10.8 percent consists of overweight and 8.0 percent very obese. Menwhile the prevalence of obese adolescents aged 13-15 amounted to 10.8 percent, comprising 8.3 percent overweight and 2.5 percent obese. More than 40 million adults in Indonesia are overweight  or obese. Most of them at risk of suffering from degenerative diseases, ranging from diabetes, heart attack, stroke, and cancer.

This is alarming to become a major public health concern. Obesity is a complex disease causing lack energy balance in the body, genetics & environmental factors, lifestyle and malnutrition. Indeed, Indonesia has a rich of natural plants such as tea leaves, rambutan peels, legumes, brown rice, fruits and vegetables. The ingredients of natural plants are able to control the developing obesity through the cell signaling pathway which is organized at the level of proteins and biological active compounds and has ability to interact and modulate molecular mechanisms underlying an organism’s physiological function. Our previous studies by animal model and in silico analysis shown the  catechin of black tea leaves could lose the rat body weight gain and inhibit the Igf-1 protein and Igf-1 receptor interaction in the adipocyte. The ability of EC, EGC and EGCG of black tea was only prevented the L1-domain of IGF-1R binds of IGF-1 protein and reduced the adipocyte proliferation. The rambutan peel extract (RPE) was also protected the receptor of Igf-1 interact with its ligand protein in obese rats, both expressions were lower than control rat group. RPE has an ability to down regulate directly the adipogenesis regulation of PPARγ gene expression and mRNA level of FABP4 genes and also prevent the body weight gain by the declining size of the adipocyte in an obese rat model, respectively. Conclusion: catechin of black tea leaves and bioactive compound of rambutan peel extract has potential  as an anti-obesity agents through regulation of the molecular signaling pathway of the adipogenesis gene cascade.

Bibliography. Prof. Fatchiyah, PhD., has completed a PhD program at the Graduate University for Advances Studies, School of Life Sciences, Department of Molecular Biomechanics, National Institute for Basic Biology, Okazaki, and Aichi Perfecture, Japan, 2006. She is senior lecturer in Molecular Genetics for Human Disease at Biology Dept. Faculty of Sciences, Brawijaya University. Malang, Indonesia since 1989 till present; as Director of the Central Laboratory of Life Sciences, Brawijaya University, Malang, Indonesia during 2007-2012; testing Laboratory Assessor, Laboratory management consultans, and as Director of the Biosains Institute of Brawijaya Universiy, Malang, Indonesia 2012-present, and as a head of the research center for Smart Molecules of Natural Genetics Resources (SMONAGENES UB) with research interests focus on: Nutrigenomics study of Molecular Biomechanics of Gene Cascade of Metabolic and Degenerative Diseases and Genes Mapping